4 kill in suicide bombing in Afghanistan 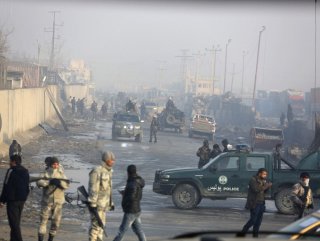 A minibus packed with explosives was detonated close to the entrance of the headquarters, said a Defense Ministry statement.

TALIBAN TOOK RESPONSIBILITY FOR THE ATTACK

It confirmed four soldiers were killed and three others wounded in the attack. “The terrorist groups have sustained heavy losses on the battlefront and continue to lose more area with each passing day, which is why they are carrying out attacks in cities among civilians,” the statement said.

Zabihullah Mujahed, the group’s spokesman, claimed on social media that one of its infiltrators staged the suicide bombing “killing and wounding 200 commando forces”.

Earlier, Nusrat Rahimi, Interior Ministry spokesman, said the blast took place in the Reshkor area of Kabul, on the western outskirts of the capital.

Following the collapsed talks between the US and the Taliban, and days ahead of the landmark presidential polls, Afghanistan has witnessed an alarming spike in violence across the country, claiming lives on all sides.

Elections in the war-ravaged country are scheduled for Sept. 28.